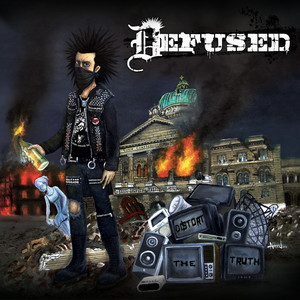 In the beginning of 2009 we started the band Defused. Punk is more than just music. Through the music we can share our opinions and ideas and let out all anger and frustration against this society. We're located near Zurich, the biggest city of Switzerland. Our sound is loud, fast and aggressive. The lyrics deal with the aspects and horrors of war, the day to day struggle, social problems, society, politics and the fuckin' way of life. Defused prefers to play in squats and clubs which support the punk scene. So far we've played with bands like The Casualties, Total Chaos, Krum Bums, The Restarts, Obtrusive, Uprising Punx, Dritte Wahl, Chefdenker and various Swiss bands. In July 2010 we recorded our first demo CD with 7 songs in Germany. One year later we decided to produce an EP with three new songs on it. The EP is called "Exploitation" and deals with the suffering of the third world, war and psychological distress. It is also directed against all right wing politics inside and outside of the punk scene. Right wing tolerance is not acceptable! Nazi punks fuck off!