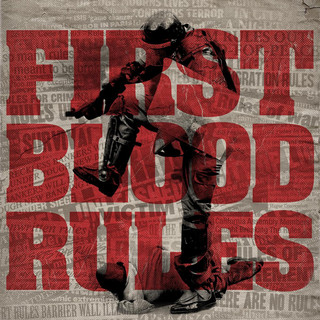 FIRST BLOOD : n. Straight-forward, metal-edged hardcore mosh : Pissed-off lyrics : In-your-face message : Formed in 2002 in the legendary San Francisco Bay Area California USA "We just wanted to play brutally aggressive music that was right to the point so kids could kill each other on the dancefloor, scream-along, and vent their frustrations" states frontman Carl Schwartz about the band's early, no-frills attitude. "We never thought or expected we would be playing shows outside of California, let alone San Francisco." That would soon change... The word spread quickly with the self-release of their crushing 5-song DEMO 2002 (later reissued by Bridge9 spin-off Division36 Records.) Followed shortly by their 2004 split 7" Dead Man's Hand Series EP with Blacklisted via Deathwish Inc, the path would soon be paved for a full-length First Blood studio release. Upon the release of their 2006 debut album entitled "Killafornia", First Blood would soon light radar screens across 30+ countries around the world, with countless tours across the United States, Canada, Mexico, Europe, United Kingdom, Japan, Australia, New Zealand, South America, China, South East Asia, and beyond. Sharing the stage with world-class acts such as Agnostic Front, Biohazard, Comeback Kid, Cro-Mags, Crowbar, Deez Nuts, Earth Crisis, Exodus, The Ghost Inside, Gorilla Biscuits, Hatebreed, Heaven Shall Burn, H2O, Ignite, Killswitch Engage, Madball, Napalm Death, The Path Of Resistance, Rancid, Sick Of It All, Sleeping Giant, Stick To Your Guns, Strife, Terror, Thy Art Is Murder, and many more, First Blood has become an unstoppable force and staple of the underground music community. "A time comes when silence is betrayal." As the world was yet again descending to the depths of war, death, and division, 2010 marked the release of the band's highly anticipated sophomore album entitled "Silence Is Betrayal" (via Bullet Tooth Records). This long-awaited concept album marked a strong lyrical shift and focus on the ongoing violence, deception, injustice, and corruption that was crippling the world (and continues to this day), while maintaining a soundtrack that was every bit as true-to-form to the brutal musical aggression many have come to expect of the band. Featuring 16 tracks of musical devastation and lyrical condemnation, vocalist Carl Schwartz hopes to raise awareness and inspire listeners. "With the criminals of this world becoming more powerful, we must constantly question authority, challenge the status quo when we see injustice, and always stand up for what we believe to be the change we wish to see in this world." Continuing the spirit of hope and inspiration, First Blood celebrated their ten year anniversary with their 2012 release, aptly entitled "Inspiration Vol. I", featuring ten crushing new renditions of classic anthems by Hatebreed, Sick Of It All, Earth Crisis, Path Of Resistance, Agnostic Front, Madball, Biohazard, and more, all re-recorded in First Blood style. Paying tribute to some of their biggest influences in music and life, frontman Carl Schwartz explains, "If it weren't for some of these bands, First Blood would never have existed." First Blood "Inspiration Vol. I" (FBI) is an Internet-only digital release and is available for free download at http://www.firstbloodrules.com "Good things come to those who wait." At least, that's what the rule says... Fast forward to 2017, First Blood is finally ready to unleash their long-awaited, third full-length studio album, simply entitled "RULES" via the mighty Pure Noise Records. Produced by recording mastermind Will Putney at Graphic Nature Studios (formerly known as The Machine Shop) in Belleville, NJ USA, "RULES" features 12 tracks of the band's hardest, yet most inward-looking material to date. Elaborating on the album title, vocalist Carl Schwartz adds, "Rules are everywhere. Explicit rules. Unwritten rules. Unspoken rules. The rule of law. Some rules we accept. Others we hate or choose to ignore. Frequently, those who set the rules are found guilty of breaking those rules. Many have become victims of the rules they live by, either by conquest or consent. I hope that, after listening to this album and reading the lyrics, we can revisit and remind ourselves of the very essence of the underground music scene: Living our own lives by our own rules." "We are also really proud to now be part of the Pure Noise roster", Carl continues, "and super excited to release our newest efforts with a team who not only saw us play live back in our early San Francisco Bay Area California days, but a team that has worked hard to create a tremendous record label that continues to make a huge impact on the underground music scene around the world." First Blood "RULES" is available worldwide on February 10, 2017 via Pure Noise Records. Official Websites: http://www.firstbloodrules.com http://www.firstbloodmerch.com Follow Us: http://facebook.com/firstbloodrules http://instagram.com/firstbloodrules http://twitter.com/firstbloodrules Record Label: Pure Noise Records http://www.purenoise.net BOOKING (EU/UK): Nanouk de Meijere ndm@kingstar-music.com Management: Jesse Barnett jesse@tandemmgmt.co