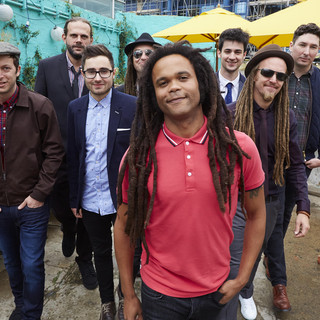 "Nice work from the New Town Kings...the best of Brit reggae” - David Rodigan MBE, BBC Radio 1Xtra Ska-reggae collective New Town Kings are an Essex-based band of upstarts who emphatically blend old-school Jamaican rhythms with a fresh dose of UK- inspired ska. The eight-piece’s first musical offering, 2007’s ‘Sound of the New Town’, demonstrates their expert ability to create party-fuelled ska anthems – with offbeat guitars and swirling horns aplenty. Following on from their debut, the Kings proceeded with sophomore release ‘M.O.J.O’ in 2011 – a carefully crafted war chest of fast-paced ska and thumping dub. Lead track ‘News Stand’ warmed the hearts of fans with its throwback to vintage Jamaican ska, whilst ‘Dynamite’ proved to be a real favourite in the live arena. 2014 saw personnel changes and the release of ‘Pull Up & Rewind’ – a four-track EP packed to the brim with energy and class. New frontman Dabs Bonner took little time in introducing himself to the New Town Kings faithful by putting his own unique stamp on their signature sound. This EP demonstrates just a small selection of their attacking arsenal, with tracks ranging from mellow, chilled-out reggae reminiscent of Gregory Isaacs, to upbeat Summer-fuelled ska of a similar vein to The Specials. Hailing from New Town, Colchester – the New Town Kings’ modern twist on classic Jamaican music has seen them tour the country and play with the likes of The Skints, Gentlemen’s Dub Club and US reggae legends The Aggrolites to name a few. The eight-piece have rarely taken it easy it when it comes to travelling the world with their own brand of ska, having clocked up over 500 shows across 10 different countries since their formation. Their punk-rock ethic and extensive touring schedule has seen them perform at the likes of Boomtown Fair, Secret Garden Party, The HMV Forum and a whole host more – and the New Town Kings tour bus shows no sign of slowing down with further plans in progress for 2015. Having received widespread acclaim from the likes of Punktastic, the bands latest material has gained the attention and approval of BBC 1Xtra’s reggae- hotshot David Rodigan MBE – an influential figure in the world of reggae. 2015 looks set to be another storming year for the Essex-based crew, with another heavy tour schedule and album number three on the horizon. With slots at the likes of Rebellion Punk Music Festival and Boomtown Fair already secured for the summer, the Kings show no sign of hanging up their horns just yet.