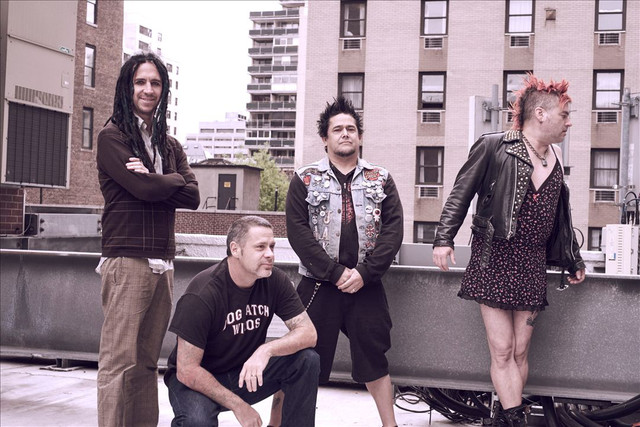 If there’s been one constant in NOFX’s twenty-five year career, it’s been their quest to innovate, whether that means writing the world’s most prolific punk song (“The Decline”), playing shows in some of the most dangerous locales in the world (as evidenced in their Fuse TV series Backstage Passport) or tackling subject matter that will make you laugh, cry and critically think—often within the confines of the same song. NOFX (frontman Fat Mike, drummer Erik Sandin and guitarists Eric Melvin and El Hefe) carry on this tradition with their eleventh studio album Coaster, which exposes a more personal and introspective side of one’s of punk’s most revered and enigmatic acts. “I think that this record is more old-school than anything we’ve done in the past,” Mike says about Coaster. “NOFX were a hardcore band that got melodic, but to me the best kind of music came out of that early ’80s L.A. movement,” he continues, citing acts like the Adolescents and Circle Jerks as constant influences and adding that Coaster is “a little darker and less aggressive than our other stuff.” Recorded with legendary Descendents drummer Bill Stevenson at San Francisco’s Motor Studios, the album accurately captures the eighties sound—although Mike insists this wasn’t a conscious effort. “We’d just start playing a song and we all kept thinking that clean guitar tones would sound better; it just kind of drove it more,” he explains, adding that the band strictly used vintage Silvertone amps and Fender Jazzmasters to capture that era’s incendiary sound. When you consider what Mike has been through since the band released Wolves In Wolves’ Clothing in 2006, it shouldn’t any surprise that some of Coaster’s lyrical content is bleak—a fact that’s evidenced on the band’s most personal song to date, “My Orphan Year,” which is about the passing of both of his parents in 2006. “Once I had a kid I realized that you have to give your child a lot of attention if you want to be a parent, so when my dad asked me to come see him on his death bed I just said no, where were you when I was a kid” he explains when asked about the song’s content. “Alternately, I was with my mom for the whole month that she died 24 hours a day,” he continues, adding that many people have cried the first time they’ve heard the track. “I know a lot of people who have had similar experiences, so it’s really amazing to be able to evoke that kind of emotion from people.” However that doesn’t mean that Coaster is a complete downer—and from awkward conversations with lesbian sisters (“Creeping Out Sara”) to a critical view of domestic exceptionalism (“We Called It America”) and the skewering of organized religion (“The Best God In Show”), Coaster is still teeming when the razor-sharp wit and parody that NOFX have become famous for. “People are like, ‘Why don’t you stop bashing these Christians already?’” Mike explains, when asked about Coaster’s subject matter. “It’s because I can’t get away from it. From the daily news to religious wars to Proposition 8 and the fucking gullibility of people thinking there’s some guy who’s the son of God,” he continues with a sigh. “I can’t believe how stupid people are, yet these same people are running the fucking world.” While the world may not be a perfect place, NOFX have always made the best of it, which is evidenced in their successful TV series that aired last year on Fuse TV. “Backstage Passport wasn’t like ‘Let’s do a TV show,’ it was like, ‘Let’s show people how much fun we have on tour because we don’t know any other band that does,’” Mike explains. “It isn’t showing four guys just bitching about how hard it is to be on the road and how they miss their family, but about how much fun we’re having in crazy situations,” he continues. “We tour with a lot of bands and it always seems like we’re having the best time of our lives, no matter what goes wrong or right at the gigs.” After famously refusing to make videos and give interviews for a majority of their career, both Backstage Passport and Coaster are insightful glimpses into the inner workings of one of punk’s most iconic and guarded bands—and whether you’re new to NOFX or have followed their rise to unlikely cult superstardom over the past two decades, these releases also show that punk’s most irresponsible band can actually mature.sort of. “I wrote a song about my parents dying and then I cry in Israel on TV,” Mike summarizes when asked to condense the past few years into one sentence. “I think this year you definitely get to see the inside of NOFX instead of the goofy exterior,” Mike acknowledges,“and people seem to enjoy it.”